Little is known about carpets made in Isfahan before the Safavid monarchy, and no carpet has survived from the years previous.

It seems that the fame and popularity of the Isfahan carpet is mostly indebted to the lost and forgotten Qazvin Carpet.

Long and thick pile, large stitch, plain and imaginative patterns are the most striking features of the classic Khersak carpets.

These carpets were woven in various villages of Ilam such as Dare Shahr.

During the past decades the provi nce encountered economical problems in its agriculture and animal husbandry. 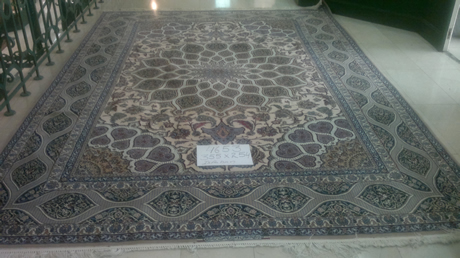 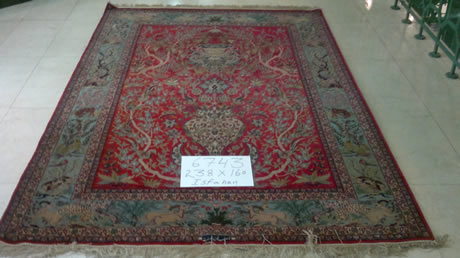 In fact, after the fall of popularity from Tabriz, in the Safavid era, lots of Iranian artisans gathered in the new capital of Qazvin for a short time.

Later on, the capital was moved to Isfahan. Since that time, especially under King Abbass the Great, the glorious epoch of Isfahan art, including carpet weaving, began.

Due to the King's special concern for Isfahan, the city developed rapidly and in the mean time, Isfahan artists could win court appointments. Undoubtedly, through the evidence of undeniable documents, the first royal carpet workshops were established during the period of King Abbass the Great.

Several pieces of evidence found in some parts of Isfahan prove this claim. For instance, one of the workshops was located in the southern part of Aliqapou Palace between Naqshe Jahan Square and Forty Columns Palace.

Moreover, some court carpets produced in such works hops have still survived and are kept in different museums and private collections.

After the Safavids, similar to economic and social status at the time, Isfahan carpet weaving experienced lots of transformations. But around the middle of the Qajar reign and during Zelo Soltan's governance over Isfahan, the carpet weaving industry flourished once again.

However, by comparing the contemporary hand woven carpets of Isfahan to the remnant pieces of that period, a distinctive difference can be inferred. The most important of all is the carpet motifs inspired from decor ative tile works of ancient monuments, to the extent that most researchers believe that Isfahan carpet weaving style has always been influenced by its historical buildings.

In fact, Isfahan carpet designers and weavers have frequently made use of rich inventive designs along with warm appealing colors such as red, blue, and dark blue throughout the centuries. That is why their productions are referred to as the most popular classic city woven carpets in Iran. At present, medallion and corner piece, allover, hunting park, vase and tree patterns are the most commonly used designs which along with Eslimi, Khatayi, Gole Shah Abbassi and Gole Farang motifs have been able to create harmonious, eye catching, and artistic pieces.

During the past two decads carpets woven in the city are characterized by pictoral designs, the most prominent of which are designed by Akbar Mehdiyi. Isfahan carpets mainly measure five to six square meters or less and generally, silk warps constitute their foundations. Moreover, wool and cork are often used as their most important pile fiber, and cotton is most often used as the weft of such carpets. Dominant colors are red, cream, and colors such as green, blue, copper, and purple are frequently used.

Furthermore, Mr. Dardashti could win the Internat ional Quality Production Prize. Geographically speaking, carpet weaving in Isfahan region is only limited to two of its neighboring cities, Najaf Abad and Shahreza and in addition to their unique charact eristics in design, color and raw material, short and dense piles along with delicate weaving style are their most important physical attributes.