Like Kashan, Kerman has a rich history in carpet weaving. The art approached a peak under the Safavids dynasty esp ecially after the city's textile industry drop to low ebb.

Kerman's shawl weaving has also been famous and from the point of the view of quality and quantity of production, it has been a rival to the excellent Kashmir manufactured Shawls.

Although its remained pieces of carpets are not older than 400 to 450 years, some evidence indicates that the city's carpet weaving industry may go back to the earliest times - some two and a half thousand years ago.

The reasons include; first, in Kerman style after the completing each row of knots, the weft is passed through the shed bet ween the warps three times before tying the next row of knots.

This method of weaving can be found in the Qomes preserved carpet fragments, which are attributed to late Ashkanids and early Sassanids empires. Second, weaving looms of Kerman are unique.

They are not free standing ones but attached to walls of the houses with no vertical wooden rods. Such looms are fairly common in Kerman and its neighboring regions.

Third, Kerman's well- known flower motifs have firm ties with ancient Persia's garden designs. They are indeed modern versions of the pattern used in the legendary "Spring of Khosrow" carpet. The carp et possibly the most costly and magnificent of all time, made for Ctesiphon palace of Sassanian king Khosrow I. Described in historical annals of the Muslim scholar Al- Tabari, it be-came the model for subsequent carpet gardens.

The carpet was called the Spring of Khosrow because it represented in silk, gold, silver, and jewels, the splendor of flowering spring. The design was a formalized paradise with streams, paths, rectangular plots of flowers, and flowering trees. Water was represented by crystals, soil by gold, and fruits and flowers by precious stones. When the Arabs captured Ctesiphon, the carpet, which measured about 1000 square meters was cut into fragments and distributed to the troops as booty. 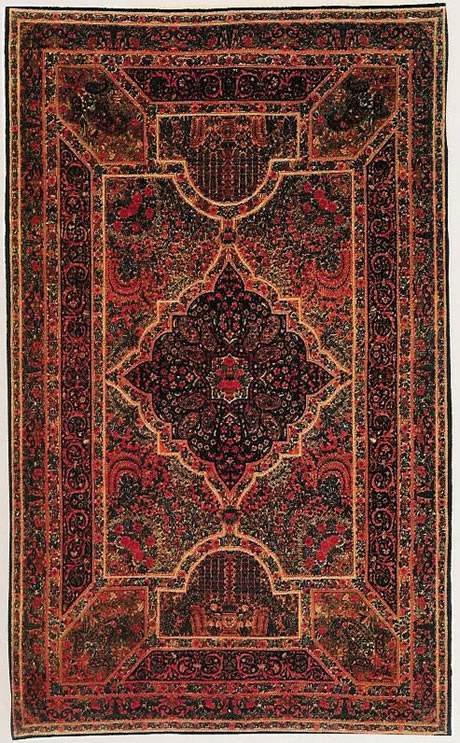 Kerman's flower motifs are frequently used in medallion and corner piece, allover, vase, tree, and even in picture designs in a variety of ways. The design and coloring work is clearly a professional job and the materials used and workmanship is usually of high standard. Silk is rarely used and woolen piles are knotted on cotton warps and wefts. Most sizes are made, from small rugs up to quite large oversize carpets. However, the production of large sizes is more common. Kerman carpets do not generally come from the city but from a very large region including Ravar, Rafsanjan, Zarand, Mahan, Joopar, and Golbaft.