When speaking about the art of Khorasan, we should note that we are referring to the Great Khorasan whose capital was Herat.

It dates back to the 4th Century, the glorious period of Iranian art, which coincided with Tirnurid reign. At that time, a group of skilled Iranian artists including calligraphers, architects, book binders, painters, and carpet weavers worked in court workshops under the umbrella of the throne.

Although, not many pieces of carpets have remained from that time, hut their strong presence is noticeable in the paintings of that era. Therefore, it's easy to examine the patterns and colors of the carpets woven during the period.

Fortunately, many of these paintings are kept in museu ms and private collections. As the Timurids were over thrown, and due to the strengthening of the Safavids, Herat gradually lost its position as the center of activity for Iranian artists.

Consequently, it was replaced by Tabriz. As a result of frequent conflicts and battles in the East of fran, Khorasan broke apart and throughout the following centuries, Mashad played the role as the artistic center of Iran, and suitably

served as an important district for the weaving of Herati classic carpets. Therefore, Mashad woven carpets became well known as one of the five-city carpet weaving centers which possessed its own independent style, design, and pattern.

In fact, much of the popularity of Mashad carpets today can be attributed to Classic Herati carpets and their designers such as, Kamaledin Bchzad, Agha Mirake Khorasani, and their teachers and students. Currently, Mashad is the trade and export center for the carpets woven in the region of Khorasan in northeastern Iran.

It is worth mentioning that Khorasan covers a vast area, which stretches from Bojnourd, its northern most border, to Birjand and Nchbandan, its southern tip. As a result, Khorasan is made up of several districts, each of which has its own specialized style. 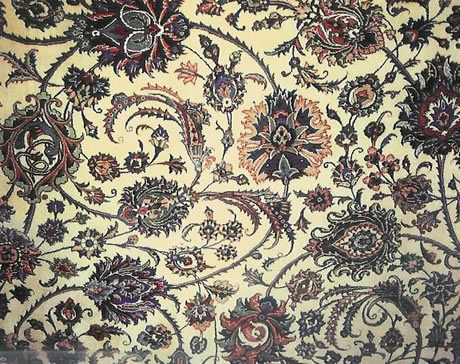 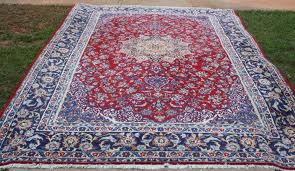 Turkiman carpets woven in Bojnourd, Kurdish carpets in Qoochan, Shirvan, Esfarayen, Dargaz, Chenaran, city woven carpets in Mashad, Sabzevar, Neishabour, Kashmar, Gonabad, nomadic rugs woven in Torbate Jam and Torbate Heydariey, Arabic rugs in Ferdos and the north of Nehbandan, and finally, the historically rich rural woven carpets in Birjand, constitute these districts. As was mentioned earlier, carpets woven in this vast region including Mashad, Sabzevar, Neishabour, and Kashmar have their own specialties, which are inspired by Herati classical carpets. Luckily, traces of such historical links are elegantly portrayed and can still be found in some of the carpets made in the region today.

The use of flowers and other large decorative elements, alongside narrow Stripes of Khatayi, are the particular characteristics of such patterns and motifs. The most charming of which, are displayed in the holy shrine of Irnam Reza.

Most of such carpets are woven and made in Astane Qods Razavi Production Company. During the past two decades, the weavers of these carpets have skillfully been able to create a spectacular harmony between the classic and modern styles. Wide area coverage combined with the use of red pigment in the inner field of Mashad city Woven carpets gives it an excellent appearance.

From the end of the last century, reputable carpet weavers such as the Amou Oghti Family, Abbass Qoli Saber, and Mohammad Ebrahjm Makhmalbaf, contributed to the popularity of Mashad carpets in the Persian carpet-weaving field. In fact, carpets woven by the Amou Oghli Family have obtained a special position in Iranian contempora city woven carpets.