Nain rugs, the finest of all modern Persians, are made in a hundreds of villages in the area around Nain.

The carpet production in Nain is fairly recent; non-existed during the great classic era, the town then being famous for other fine textiles. It was when this industry began to decline in 1920s that the manufactures switched to carpets.

At first they made medium-fine goods in rather stiff designs with rich blue and brown-red colorings. In the beginning, Nain classical carp ets stylistically fell into nomadic and rural rugs classificat ions.

Since 1940, however, they have settled on an unmist akable superfine style of their own. Although Nain carpet designs and patterns are attributed to Isfahan school, there are evident stylistic differences which can be used as helpful clues.

Nain rugs usually have cotton warps, and woolen pile with the outlines of the design edged in silk. lsfahans mostly have all-wool pile but use silk for the warps. The most obvious characteristic of Nain is the coloring, which is dominated by light or dark blue and cream or mushroom.

All other colors are used, but mostly very sparingly; some pieces have red or gold grounds, hut these are rare. Red, in general, is noticeable by its absence. The overall effect of the coloring is restrained, no to say decidedly cool. There is a huge range of designs made in Nain. Some carpets share their designs with that of the domes of famous mosques such as Sheikh Lotfollah, or Imamzadeh Mahrooq.

Others include Shah Abbassi medallion and corner piece, Eslimi and Khatayi medallion and corner piece, and allover patt erns along with Shah Abbassi, Eslirni, and Khalayi motifs. While referring to Nain carpets, dealers often use some techn ical terms such as Nain 9 La, Nain 6 La, or Nain 4 La. The word "La" is a local and technical term for a warp yarn. 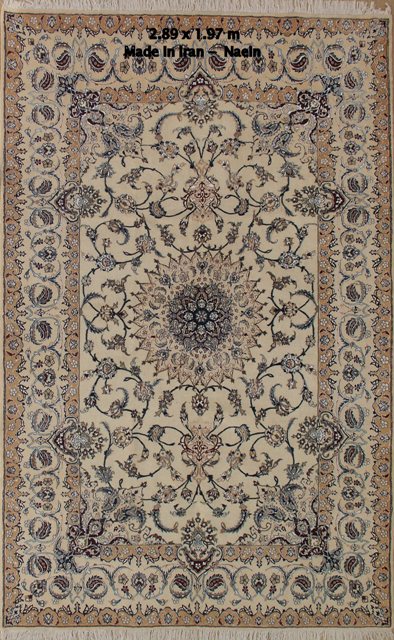 For instance, a Nain 9 La is a warp yarn made up of 9 spun threads. In fact, Nain 4 La is considered to be the most luxurious and delicate carpet with the stitch of 65-75 knots per 6.5 cm in the width. As was mentioned, silk is used in a very special way in Nain carpet; all the outlines of the motifs are in silk, the rest of the pile is wool, the warps and wefts are only cotton obtaining the richest and the most delicate effects of design.

In carpet sizes, pieces with an area of 2 by 3, 2.5 by 3.5 and larger are more common. It should be noted that Tudeshk, one Nain's surrounding vill ages, has greatly contributed to the increasing popularity of Nain carpet. Furthermore, some reputable carpet weavers such as late Fathollah Habibian Naini and his family have tried hard, to give prominence to the present status of Nain carpet throughout the world. Their names are deeply res pected by Iran contemporary carpet weaving industry.