A glance at other rug production centers of Iran

Hamadan
The city of Hamadan is one of the oldest plateau; also known as Ekbatana and Hegmataneh. It is of particular importance to the carpet industry since it serves as the market for hundreds of villages including Enjilas, Souzan, Darjazin, Kaboodar Ahang in the surrounding plain and as the base for buyers who cover wide area of western Iran.

Chahar Mahal va bakhtiari Chahar Mahal is a fertile region south-west of Iran on the slopes of Zagros Mountains. Long time ago some of the leaders of bakhtiari thbe, a Luri group, settled as gentry in this region. Within the province of Chahar Mahal there are scores of villages making different versions of Bakhtiari carpets. However, some villages on the norther edge of the province are universally acknowledged to be the home of Bakhtians. They include Chalal Shotur, Ghahfaroq, Saman, Hiregan, and Babaheidar.

Malayir
South of Harnadan there is a largish area producing rugs of varying quality in wide range of designs. Malayirs have much in common with traditional old Hamadans. The city is a market center for city woven rugs mostly woven in its east and south-cast neighboring villages including Jozan, Manizan, Mishin, Taimeh, and Biqshrou. 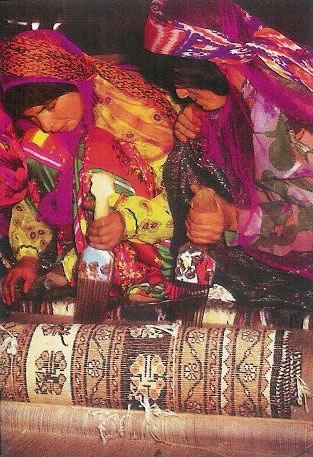 Bijar and Sanandaj (Senneh)
Bijar and Sanandaj are two principal Kurdish cities of western Iran. Within this large region, many different tribes are settled and wide variations of styles are found. Each tribe has its own characteristic designs and colors. Despite their similarities, there are stylistic differences, which are easily recognizable. The Bijar rug has a coarse, dense, and heavy structure usually referred to as iron rug among carpet dealers. Sanandaj on the other hand, makes one of the finest weaves anywhere in the orient.

Arak (Sultanabad)
Arak, Ferahan, Mushkabad, and Mahal carpets have a great reputation for quality combined with elegance and restraint.

From the late Qajars onwards, the city enjoyed rapid development and its goods especially village rugs were universally acknowledged. Indeed, its heyday beganin the late nineteenth century when an Anglo-Swiss company, Ziegler and Co., established the first foreign office in Arak and began to supplement local purchases with direct manufacturing.

By the beginning of the twentieth century this enterp rise had become a big business, and other European and American compan ies including 0CM and Taushandjian beg an to establish themselves in the region.