The city of Qom, for centuries a center of pilgrimage, has also become an important center for carpets from vifiages in a large area.

Stylistically, Qom classic carpets are attributed to nomadic rug category. Despite their great potential, for years such carp ets had totally been neglected due to several transformations that had been occurred in Iran contemporary carpet weaving history.

Since around 1921 to 1941 European market heavily demanded for carpets with more delicate and finer stitch. From that time some weavers produced rugs in which certain parts of the design were highlighted in silk.

Such productions were highly regarded in European countries. Accordingly, at about this time the weavers began to make all-silk rugs with much finer stitch than the original part-silks.

Therefore, the imaginat ion of weavers and the support of buyers produced quite luxurious and charming city woven carpets enjoying a unique character compared to their rivals produced in other cities of Iran.

In fact, no other material produces such elegant, delicate rugs, displaying a subtle color nuances of particular charm in different lights, as silk does. After the emergence of such excellent, exceptionally delicate carpets, carpet designers and producers hurried into Qom from the nearby villages and towns and intensified the silk carpet production industry.

Consequently, Qom nomadic rugs depressed gradually as they could no longer compete with their modern, brilliant rivals. In addition, the success of emigrant master designers who had mainly come from Isfahan, Kashan, and Arak, in combining their regional designs and creating new harmonious and perfect styles led to the appearance of extremely rich, superb designs in Qom. 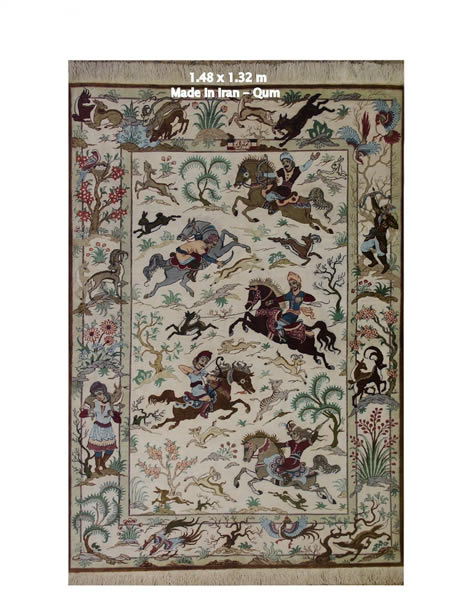 Over the past decade, frequent application of Gole Farang motif has been the particular characteristic of Qom weavings. Und oubtedly, Qom designers and weavers are considered to be the most well-known producers of such motifs. The palette of colors used in Qom is as rich as the range of designs. One can find, in addition to bright-red and black-blue grounds, light blue, light green, mushroom, rose, and gold. Some pieces have a very strong combination of contrasting colors.

Qom carpet weavers tend to produce smaller size carpets called rugs, a piece with an area of up to about 4 square meters. Geographic ally speaking, caipet weaving in Qom region is only stretched towards its west and south-western parts, to the east it is liini ted to the underdeveloped salt desert. In addition to the nomadic and modern rugs, one may encounter Shahsavan and Afshar productions in Qom carpet market.

These weavings belong to migrating nomadic tribes who are scattered from south of Azerbaijan to Bijar, Zanjan, Qazvin, and west of Qom. Howe ver, their presence in Qom market does not necessarily mean their dependency on Qom outputs. In fact such productions have traditionally been exhibited in Qom market throughout years. Today, Mir Mahdi, Rajabian, and Nooii, are regarded as the most reputable Qom carpet manufacturers.