After Herat, Tabriz was the second center wherein several artisans, including carpet weavers, flourished under the royal support of the Safavids.

At this time, the art of carpet weaving approached its peak. Fortunately, many of the carpets woven at this time have survived and interestingly, represent the supreme achievements in the entire field of carpet designing during that period.

Tabriz is the principle northwestern city of Iran and one of its most well known carpet producing centers. Although the city has a long history in carpet weaving, its golden age dates back to 150 years ago.

After the demise of the Safavids until around the middle of Qajar rule, carpet weaving in Tabriz experienced various ups and downs. However, it was never totally depressed.

During the reign of Kitig Naser-al din, a remarkable incident occurred in the history of Tabriz, which by its turn, increased and promote the popularity of the city and its productions. From that time, Persian carpets have been officially exported to European countries and Tabriz has prominently served as the first carpet-trading center.

Iranian hand woven carpets were exported to European countries via Tabriz and Istanbol. It is worth mentioning that most Iranian carpet businessmen had established their own stores and warehouses in Istanbol as overseas branches, mainly located in the district called Saraye Valede Khan, whose ruins still survive.

From among the merchants of that time, Haj Yousef Ghalichi, Haj Abdollah Ghalichi, Haj Samad Qare Ghalichi, Deylamaghani, and Haj Reza Shahia are the most reputable. Furthermore, the unique status of Tabriz in carpet exporting can be viewed from different dimensions.

First, Tabriz was not only considered a gate for the export of regional hand woven carpets, but also carpets woven in other areas of Iran found their way to European countries via this city. Consequently, Tabriz busin essmen exported carpets woven in Isfahan, Hamedan, Mashad, Kashan, and Kerman and at the same time, paid special attention to the development of carpet weaving production in their own city. 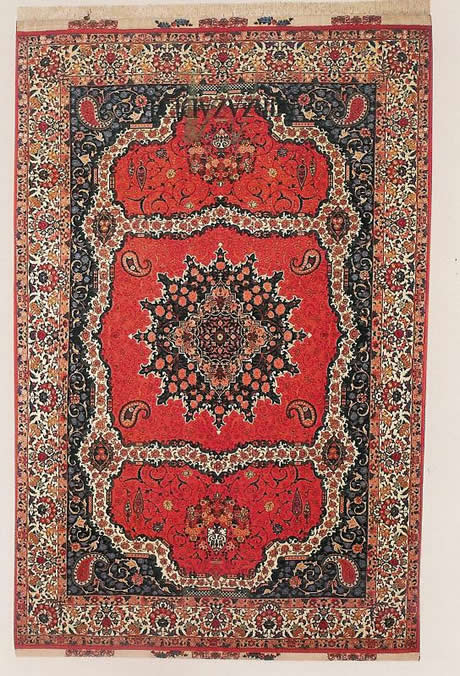 As a result, carpet weaving experienced a great and drastic movement forward. Second, the large quantity of carpet export played a dramatic role in the increase of revenues and incomes for the weak Qajar Dynasty especially for King Mozafar-e din and King Ahmad. In fact, the income received from carpet exporting resulted in the endurance of the Qajar dynasty, despite the fact that they were in debt.

The vital income provided by this export was illustrated by the first postcards published during that era which showed pictures of camels carrying consignments of carpets. It interestingly reveals the Qajar's sheer admiration of their success. Since the early 18th century, Tabriz has reserved its strikingly prominent role in the calpet market and economy.

The reason why Tabriz carpets are highly regarded by people of all walks is undoubtedly due to their wide range of designs and patterns on the one hand, and their high quality of color on the other. The immense diversity of styles found in Tabriz make it possible for carpet customers to find their desired carpets easily and without any trouble.

In other words, the exceptionally wide range of colors, along with rich inventive designs, is considered as the unique characteristic of Tabriz contemporary carpets. Throughout decades, Tabriz carpet designers and weavers have been able to successfully produce bewitching designs and patterns by making use of innovation and imagination.

The ingenuity and imaginative range of patterns mainly include motifs such as hunting park, allover, medallion and corner piece, medallion, mehrabi, tree, vase picture motifs or their combinations. The most striking stylistic feature of Tabriz carpet designers and weavers, compared to other city woven productions, is their unquestionable ability for creating splendid human figures.

The dominant colors in such carpets are usually red, cream, indigo, pink shades, and green and a high priority are given to the use of cotton, wool, and silk yarns. Today Ahrnad Emad, Haj Hassan Ala Baf, Au Nasab and the Nezami brothers are regarded as the most reputable Tabriz carpet manufacturers. Moreover, it should be noted that the production area not only consists of Tabriz itself, but also the neighboring towns of Maragheh, Marand, Khoi and many surrounding villages in the Azerbaijan province.

In other words, Tabriz is considered an important center for carpet business activities woven both in the cities and villages nearby. Such northwestern carpet weaving centers include Heriz, Bakhshayesh, Georovan, Mehriban, Ardebil, Meshkin, Sarab, and the most famous, the carpet weaving center in the village of Heriz. Heriz carpets are so unique and precious that carpet traders, merchants, and collectors refer to them as the most valuable and costly Iranian rural woven

carpets. The most important reason for this elegancy lies in the talented use of silk, which is rarely used in the other rural hand weaving areas of Iran. Furthermore, superb and rich designs, particularly geometric and semi-geometric medallion and corner piece patterns have greatly enhanced their perfection.

The carpets are so charming that their magnificence has yet to be fully grasped by viewers. In addition to the use of warm, appealing colors, the application of some others is noticeable. In fact, the coloring is an important distinguishing element of Heriz carpets. The dominant color is a special blue shade, which is widely used in Henz and also in the rural hand woven carpets of Azerbaij an.

Unfortunately, since the early part of this century, the production of superb Heriz carpets has gradually decreased. The reason for this depress um in excellence was due to the lack of silk thread production. Rasht, a city in the northwest of Iran, was once the center of high quality silk thread production. It was manufactured exclusively under the supervision of local governors and Italian, Russian, British, and Greek companies.

From the beginning of the century, due to unreasonable competition among International companies on the one hand, and wides pread disease among silk worms on the other, the product ion of silk has decreased drastically. Consequently, as weavers of surrounding villages, including Heriz, lost their source of silk thread, they no longer produced high quality carpets as they had in the past. Although silk is still produced in Rasht and nearby areas, it has never been able to reach its once magnificent level of production, which it enjoyed in the past.