The Iranian city of Kashan, which lies between Qom and Isfahan, has long been famous for its outstanding and excell ent textiles ornamented by gold, silver, and velvet threads.

For centuries, such productions were exported to markets throughout the world. Kashan's fame as a textile center is frequently reflected in tounsts logbooks including Sharden.

In his book he stresses "Kashan's satin, velvet, brocade and embroidered textiles have no rivals in the whole land of Iran".

Unfortunately, due to unfavorable climatic conditions like drought on one hand, and the appearance of foreign fabrics in the local market on the other, Kashan's agriculture and textile industry began to decline. As a result, little by little the manuf acturers switched to carpet weaving business.

By the efforts of carpet weavers and under the umbrella of the Safavid kings a great carpet industry was developed in Kashan and its neighboring villages namely Joshaqan that represented the supreme achievement in the whole field of carpet production.

The condition continued under the Safavids especially Shah Abbass who established palace workshops in Kashan and Joshaqan wherein many beautiful carpets came into existence.The carpets were apparently not for export but for court and mosque. It is said that European nobility ordered many of such carpets from Kashan and even from Isfahan royal workshops.

Kashan carpets do not just come from the city but from its surrounding towns and villages including Natanz and Joshaqan. But due to Kashan's centrality, outc omes of such areas are usually credited to Kashan. 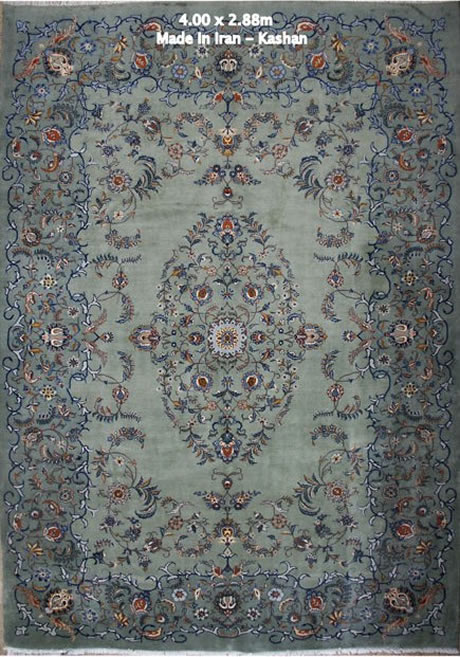 Around the turn of 20th century quite large amounts of wool was imp orted to the city from England, Manchester, to be used in textile industry but was applied to carpet making resulting in the production of luxurious, and delicate pieces for a short period of time. Such productions have been favorites among carpet collectors, dealers, and purchasers.

Although stylistic ally Kashan carpet is considered to be one of the five most important han classic carpets, its origin is attributed to nom adic rugs. In fact, stylistic features of nomadic rugs includi ng semigeometriCaI styles maintained to be widely used until around 1930s. From 1930s onwards, Kashan carpet has exp erienced great changes not only in its design and pattern, but also in the mounting of its warps.

In manufactured Kashans a very wide range of designs may be found including medallion and corner piece, allover, tree, vase mehrabi, and picture patt erns. An important element of Kashan style is the coloration with its emphasis on dark and light red, blue and dark blue, green, cream, and pink. Of course, a special shade called Kashan's beige is used as well. Kashan carpet is Persian knotted.

Although old Kashans have appeared with some motifs woven on silk; in recent times, they are mainly woven on cotton foundations -warp and wefts- and use wool and kork as pile. Many different grades are made in Kashan. The stitch may reach 30-35 knots per 6.5 cm in some pieces as well as 40-60 knots per 6.5 cm in the finest woven today. All sizes are made in Kashan but small carpets are more common. However, nowadays there is a tendency to make larger carpets with an area of 6 or 12 square meters. Long and narrow pieces called runners can also be found in Kashan manufacturers.